What Role Did Your Soul Choose?

Before you started your incarnation cycle on this planet, you had to choose one of these 7 roles, spiritual archetypes: 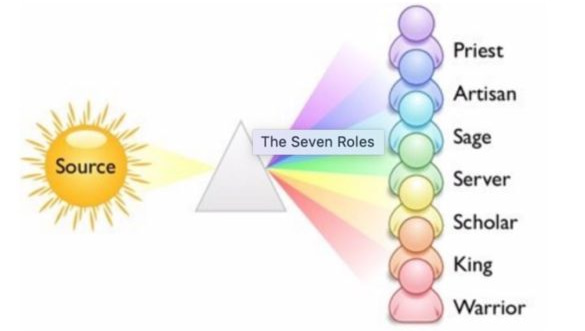 This role has defined the plan of your embodiment, who you are, some opportunities, and how you interact with other souls. It has designated your specific function in the whole system.

Your soul, therefore, has a specific role to fulfill which determines your dominant way of being.

It determines how you do everything and what you want. You can perform any activity, regardless of role, but each role inclines you to certain actions. It shapes all of your journey, your weaknesses, and your strengths, as well as attitudes and behaviors towards others.

Your soul type is permanent, regardless of incarnation. All other things can change from one life to another like race, gender, social position, or occupation, but the essence and consciousness will always be consistent.

There is no hierarchy in the types of souls. They are all equal.

To recognize your role, check out the following descriptions for each one.

PRIEST
They have a greater sense of mission than the other types, a calling, the need to make the world a better place. A priest tries to raise awareness and improve the world. They raise people, enjoy the motivator role, and loves to direct their strength to help others succeed. A priest inspires their followers to make positive changes in their lives. It is a source of energy for others. Naturally, they are attracted to the roles of religious or spiritual leaders.

It accounts for 7% of the population.

ARTISAN
Represents the essence of creativity and invention. They have a great imagination that prompts them to discover new perspectives and combinations. An artisan likes to realize their ideas in interesting tangible forms. They need to create anything, from a poem, through handicrafts, to scientific theories. Original and productive.

It accounts for 22% of the population.

SAGE
Someone who knows everything. Great for communication. They can express higher mental abilities such as wisdom, beauty, love, harmony, and philosophy. They like to share their wisdom with others. Usually a charming person. They provide entertainment to others thanks to their charisma. A sage loves public appearances. They are constantly looking for the attention of others. In childhood, they could be a class clown.

It accounts for 10% of the population.

SERVER
They try to serve the common good. They want to solve the problems of the whole world in the material, psychical sense. A server is sweet by nature, obliging, caring hospitable, modest, and tries to serve everybody with their help. However, despite their good-naturedness, they may seem to carry the weight of the world on their shoulders. This is because they tend to identify with the misery and suffering of others. They always place the needs of others in front of their own and feel the need¸ to be needed.

It accounts for 25% of the population.

SCHOLAR
Looking for knowledge. They often see life as an experiment. They are distinguished by great curiosity. A scholar loves to gain knowledge. Rather calm by nature. They absorb and integrate information from the world around them, not necessarily scientific, can also get general information about life. Their role is to develop and maintain our common knowledge.

It accounts for 13% of the population.

KING
Born leader and commander. They have a strong personality. Assertive, concentrated, often self-righteous. A perfectionist demanding high standards from others. Predicts what to do and forces to achieve this. They perfectly separate tasks between people. A king solves problems very well.

It accounts for 4% of the population.

WARRIOR
Strong, loyal, determined, steadfast, loyal. An embodiment of courage and determination. They love to overcome challenges to achieve their goals and dreams. Often athletic from nature. They like to work hard and be rewarded for it. A warrior must fight for everything in life.

It accounts for 18% of the population.

Although you can identify many of the roles above, each of us has only one role that is our dominant energy. Souls also merge into groups whose common feature is the dominant role.

Living A Pain Free Life – Is It Possible?

Living A Pain Free Life – Is It Possible?

Learn how Tamaey's deeply intuitive gifts and ability to tap in your subconscious can help you release trauma, awaken to a higher aspect of yourself, and help you finally live the life you have always imagined.

Check out the special offers on these at-your-own-pace classes on the topics of Manifesting and Ascension.

3 Simple Steps To Create Miracles In Your Life